Boom System for RadCube mission successfully integrated on the spacecraft

Boom System – a part of the RadMag instrument for the RadCube mission – was developed and successfully delivered to the customer by Astronika. Mechanism’s task will be to position the measurement device away from the satellite’s main body. As a part of RadCube satellite, it will contribute to demonstration of use of miniaturized technologies for in-situ measurements of space radiation and magnetic field environment in Low Earth Orbit.

Astronika’s work on the Boom System development started in 2017 within the project team led by Dominik Nolbert. Company was responsible for Boom System’s full development, starting with design, through manufacturing up to integration and extensive test campaign. It was accepted by European Space Agency (ESA), successfully delivered to the client in February for integration within the spacecraft,and now is undergoing  final tests before the mission’s launch planned for July 2021.

Boom System is a part of the RadMag – compact and adaptable Cosmic Radiation and Magnetic Field Instrument Package. RadMag, being the primary payload of the mission, was designed by MTA EK Centre for Energy Research,  Hungarian Academy of Sciences (RadMag leader) in collaboration with  Astronika  and Imperial College London (responsible for magnetometer development).

Boom System in a nutshell

Boom System is a mechanism based on the tubular boom technology, which is designed to extend the outboard magnetometer away from the satellite’s main body. Tubular boom technology was used – as the lightest possible design known to Astronika – to meet the requirements for a very compact and light solution.

The device, weighing approximately 150 g (without carried load) contains 80 cm long tubular boom of high positioning accuracy (both angular and linear), along with relatively high capacity cable container (up to 90 cm of 20 wires cable; designed and manufactured by Astronika as well), in a form of small package of 92 x 45 x 46 mm (including carried load).

Additionally, Boom System manipulator is characterized by highly smooth deployment with speed of 5 cm/s. Deployment process – speed and distance – can be controlled by onboard optical encoder, which also provides the opportunity for step-by-step deployment.

Non-explosive Lock & Release Mechanism used in the Boom System features a redundant solution of the Dyneema wire cutters usage with peak power consumption of 4W as a baseline.

Although the device is based on previous developments, particular project requirements were so specific that it can be considered a new technology – says Domnik Nolbert, project manager for RadCube in Astronika.

RadCube satellite will launch in July 2021. The estimated duration of the mission is one year. 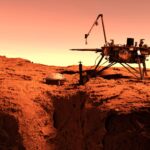