JUICE
Home Portfolio JUICE
Investigating Jupiter and its icy moons with Astronika instruments
Since 2015, the personnel currently employed by Astronika has been breadboarding the LP-PWI and RWI instruments for ESA’s JUICE mission within the RPWI instruments consortium (Radio Plasma Wave Investigation) led by the Swedish Institute of Space Physics in Uppsala (IRFU). This phase B2 was conducted by CBK PAN (SRC PAS) and the activities are now intended to be continued by the same key personnel under Astronika industrial contract for phase C and D.

The main goal of the mechanism is to position the Langmuir Probes at the desired angle of 135º and 3 m from the spacecraft. To achieve this, the LP-PWI unit consists of two CFRP links joint with hinges and driven by clock springs.

The major design challenges are the large scale of the system, the extreme ranges of temperatures in a space environment (below -200degC near Jupiter to above 200degC during Venus flyby), the dynamic deployment principle due to the light-weight design requirement (<1.4kg per unit) and its low natural frequencies.

Despite these challenges, the design went through successful breadboarding, including deployment tests in simulated zero-gravity conditions, as well as vibration and thermal-vacuum tests.

As a result of Phase B, a mechanical breadboard of a single dipole antenna was successfully designed, manufactured, assembled and subjected to a test campaign which included functional (deployment), vibration and thermal-vacuum tests. The test campaign was successful and the proposed antenna achieved TRL 5. 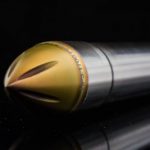 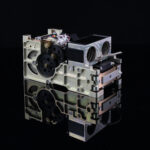