November 26, (at 3:00 p.m. ET) InSight lander touched the Martian ground. InSight (Interior exploration using Seismic Investigations, Geodesy and Heat Transport) is a NASA mission that will place a single lander on Mars to study the planet’s deep interior. “By using sophisticated geophysical instruments, it will address fundamental questions about the formation of Earth-like planets by detecting the fingerprints of those processes buried deep within the interior of Mars.”

As a part of the mission to Mars, an unmanned lander was sent to perform a historical study of the planet Mars. One of the three main devices that the InSight mission took onboard is the HP3 (Heat Flow and Physical Properties Package) – an instrument designed and integrated by German Aerospace Agency (DLR) which will take Mars’ temperature, revealing just how much heat is still flowing out of the interior of the planet. HP3 will conduct its research using a “Mole” – a sophisticated penetrator which hammers itself under the surface.

The mechanical heart of the Mole – it’s drive – was designed and integrated by Astronika.

Mole’s drive is a complete hammering mechanism made entirely in Poland. The mechanism developed by our engineers will burrow down the Mole 16 feet (5 meters) below the Martian surface. That is deeper than all previous instruments to any planet, moon, or asteroid. The task of HP3 will be to study the history of the formation of Mars, the changes that take place in the structure of the planet, temperature and planetary nucleus.

For the first time in history, the representative of a Polish company was nominated “Co-Investigator” of the NASA mission. Co-Investigators are a part of the InSight Science Team. They are extraordinary individuals who have been selected by NASA to participate in the InSight Science Investigation. This Polish Co-investigator is Jerzy Grygorczuk PhD. from Astronika, the man who has already designed the mechanism for MUPUS penetrator for the Rosetta mission – the first mission in the history of the mankind which landed (in 2014) on a comet. 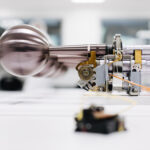